Brennan was born Topeka, Kansas, January 21, 1975; Brennan graduated from Washburn Rural High School in Topeka, Kansas in 1993. Brennan graduated from the University of Kansas with a Bachelor of Arts degree in Political Science in 1998 and from the University Of Kansas School Of Law in 2001. He was admitted to the Kansas Bar in 2001; to the Missouri Bar in 2002; also admitted to practice before U.S. District Court, District of Kansas in 2001 and before the U.S. District Court, Western District of Missouri in 2002. Brennan is a Member of the Douglas County Bar Association; the Kansas Bar Association; the Missouri Bar Association, and the American Bar Association. Brennan focuses his practice in the areas of Commercial Litigation, Personal Injury, Legal Malpractice, and General Civil Litigation. In his spare time, Brennan enjoys following local sports teams, golfing and spending time with friends and family. 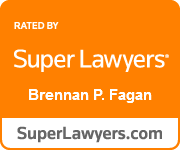